Tadashi Suzuki is one of the world’s foremost theatre directors, as well as a seminal thinker and practitioner whose work has a powerful influence on theatre everywhere.

He is the founder and director of the Suzuki Company of Toga (SCOT) based in Toga Village, located in the mountains of Toyama prefecture, Japan. He is the organiser of Japan’s first international theatre festival (Toga Festival), and the creator of the Suzuki Method of Actor Training. Suzuki also plays an important role with several other organizations: as General Artistic Director of Shizuoka Performing Arts Center (1995-2007), as a member of the International Theatre Olympics Committee, as founding member of the BeSeTo Festival (jointly organized by leading theatre professionals from Japan, China and Korea) and as Chairman of the Board of Directors for the Japan Performing Arts Foundation, a nationwide network of theatre professionals in Japan.

Suzuki’s works include On the Dramatic Passions, The Trojan Women, Dionysus, King Lear, Cyrano de Bergerac, Madame de Sade and many others. Besides productions with his own company, he has directed several international collaborations, such as The Tale of Lear, co-produced and presented by four leading regional theatres in the US; King Lear, presented with the Moscow Art Theatre; Oedipus Rex, co-produced by Cultural Olympiad and Düsseldorf Schauspiel Haus; and Electra, produced by Ansan Arts Center/Arco Arts Theatre in Korea and the Taganka Theatre in Russia.

Suzuki has taught his system of actor training in schools and theatres throughout the world, including The Juilliard School in New York and the Moscow Art Theatre.

The Way of Acting
By Tadashi Suzuki Translated by J. Thomas Rimer 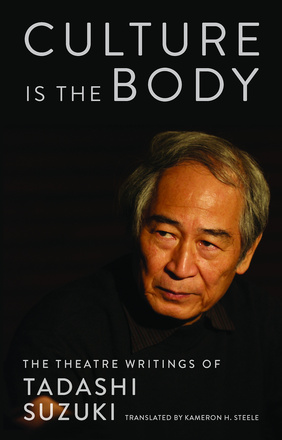 Culture is the Body
By Tadashi Suzuki Translated by Kameron Steele