Andrew Hilton is an actor, director, teacher and playwright. He created Shakespeare at the Tobacco Factory in Bristol in 1999 and remained its Artistic Director until 2017, directing 39 productions for the company, at the Tobacco Factory, the Bristol Old Vic, the Barbican Pit, and on tour in the UK, the Irish Republic, Germany and Romania. His book Shakespeare on the Factory Floor was published by Nick Hern Books in 2022.

He began his professional carreer in 1972 as an Assistant, then Associate, to Bernard Miles at the Mermaid Theatre in London, before joining the National Theatre as an actor in 1975. He went from there to play many seasons at the Bristol Old Vic, as well as appearing widely on television and radio.

Making Bristol his home in 1979, he began teaching Shakespeare acting at the Bristol Old Vic Theatre School and joined a co-operative theatre company for whom he directed new plays by James Wilson and Dominic Power, the UK premieres of plays by Brian Friel and Michael Gow, and his first production of Measure for Measure.

His Shakespeare productions at the Tobacco Factory have been widely praised; in 2001 Jeremy Kingston in The Times called the company 'one of the most exciting in the land'; in 2005 Lyn Gardner of the Guardian hailed 'one of the great tellers of Shakespeare'; and in 2013 Susannah Clapp in The Observer dubbed it 'the Shakespearean powerhouse'. But he has also been a noted director of Chekhov. His account of his 2009 production of Uncle Vanya at the Bristol Old Vic was broadcast by the BBC as part of Radio 3's The Essay Series.

As a playwright he has co-authored – with Dominic Power – Tartuffe, after Molière (Tobacco Factory, 2017), a stage adaptation of James Hogg's novel The Private Memoirs and Confessions of a Justified Sinner, and a piece of music-theatre, Lady with Dog, based on the short story by Chekhov.

Andrew was born in Bolton in 1947 and read English at Cambridge, studying Shakespeare at Churchill College under Michael Long. In 2013 he was made an Honorary Doctor of Letters by the University of Bristol for his services to theatre in the city. He is married to the stage manager and artist Diana Favell, and they have one son. 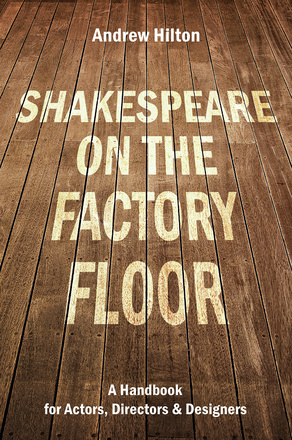 Shakespeare on the Factory Floor
By Andrew Hilton