Giles Terera MBE is an award-winning actor, musician and writer.

He trained at Mountview Theatre School and has worked consistently at venues such as the National Theatre, the Royal Shakespeare Company and Shakespeare's Globe. He is best known for originating the role of Aaron Burr in the London production of the award-winning musical Hamilton, for which he won the 2018 Olivier Award for Best Actor in a Musical.

As a writer, his theatre work includes The Meaning of Zong (Bristol Old Vic), The Ballad of Soho Jones (St. James') and Black Matter (Crazy Coqs). As a filmmaker, Giles's first documentary, Muse of Fire – created with Dan Poole – centres on modern perspectives of Shakespeare and premiered on BBC Four in Autumn 2013. Giles was an associate producer on Poole's feature documentary The Space: Theatre of Survival and he wrote and directed the concert film Hello Harry! A Celebration.

Giles was appointed a Member of the Order of the British Empire (MBE) in the 2020 New Year Honours for services to theatre. 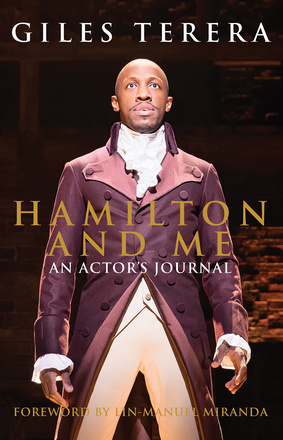 Hamilton and Me
By Giles Terera Foreword by Lin-Manuel Miranda