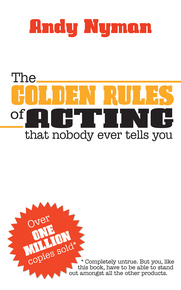 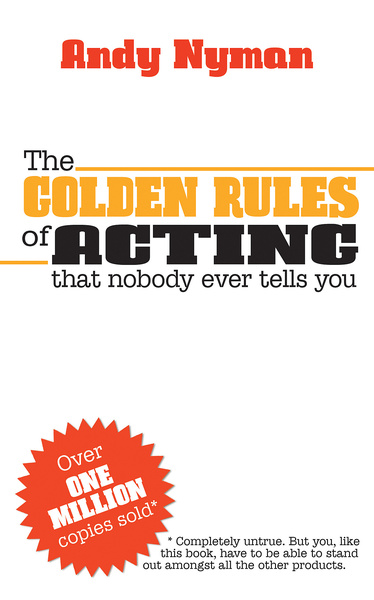 A treasure trove of advice, support and encouragement that no performer should be without. Honest, witty and direct, The Golden Rules of Acting is every actor's best friend – in handy paperback form.

Easy to dip into, fully illustrated throughout, and designed to be both instructive and empowering, The Golden Rules of Acting won't tell you how to act – but it will tell you how to be an actor.

If you're a working actor, drama-school student, someone who wants to become an actor, or simply someone who has a dream and wants to make it a reality, this book is for you.

Andy Nyman learnt the golden rules of acting the hard way, through twenty-five years of working in theatre, film and television. On stage, he co-wrote, co-directed and starred in the West End hit Ghost Stories, and won an Olivier Award for Best Entertainment for co-writing and directing Something Wicked This Way Comes with his regular collaborator Derren Brown. His many film appearances include Severance and Frank Oz's Death at a Funeral.

'I absolutely devoured this book. Yes, it's witty but it's also sincere, informative, practical and humble in its truths' Toni Collette

'This little book is a must-read for every aspiring actor and actress, including all established performers – and I have recommended it to many since reading it. It confirms and reaffirms why we are in this profession. Not only does it impart hard-earned knowledge, it does so with a sense of fun, a little mischief, and always with dignity, which (let's face it) can take a daily beating. It's probably the most important book on acting and actors I've ever read; period! Keep it by your bedside at all times!' Liam Neeson OBE

'Christians have the Bible, now actors have this book. At last, everyone is happy' Simon Pegg

'Andy's distilled guidebook is smart, hilarious, and just might get you work!' Neil Patrick Harris

'Like having a friend in your pocket! Supremely practical, wise, reassuring, inspiring and funny – chockful of good humour and good sense' Keeley Hawes

'Honest, uplifting, expert advice from a genius of the craft' Riz Ahmed

'Like its author, this little book is packed full of wit, wisdom and good things' Matthew Macfadyen

'When I was starting out, wanting to read about how to unlock the mysteries of working in the theatre, I could only turn to Stanislavski. But now, you lucky young people (and indeed people of all ages), there is Nyman. One-tenth the length, a hundred times funnier and crammed with practical wisdom… read it and in every sense, you'll have a head start' Trevor Nunn

'A wonderful insight into the secrets of success that will help anyone achieve their dreams' Richard Wiseman (author, 59 Seconds: Think a little, change a lot)

'It's a little book and it's fun. If you get only one useful nugget it will have paid for itself... Worth the cover price for the quotations alone'