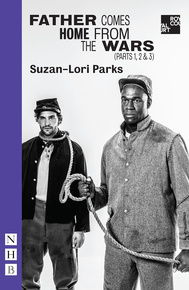 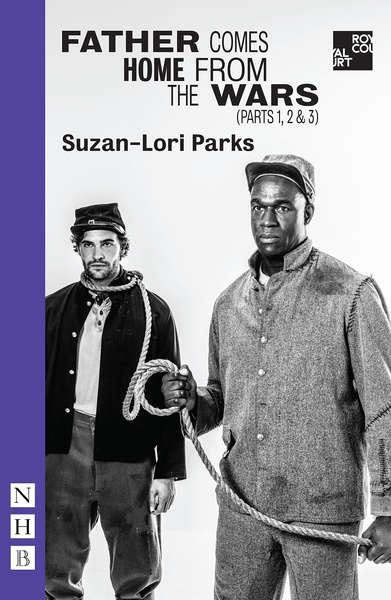 America, 1862, during the Civil War. Hero, a slave, is promised his freedom if he joins his master in the ranks of the Confederacy against the Union. In a nation at war with itself, he must fight against those striving to abolish slavery.

The family he leaves behind debates whether to escape or await his return, and they fear that, for Hero, freedom is an empty promise that may come at a great cost.

Suzan-Lori Parks' Father Comes Home from the Wars (Parts 1, 2 & 3) received its UK premiere in the Jerwood Theatre Downstairs at the Royal Court Theatre, London, in 2016, directed by Jo Bonney. The trilogy premiered at The Public Theater, New York, in 2014, was a finalist for the 2015 Pulitzer Prize for Drama, and won the Edward M Kennedy Prize for Drama Inspired by American History.

‘Seems like the worth of a colored man, once he’s made free, is less than his worth when he’s a slave.’

'Mischievous, mighty and moving... a restlessly intelligent, compelling work that expresses, with inspired dramatic invention, the way that the brutal past pervades the present'

'Epic in every sense... totally compelling... captures the complexity of a civil war where black Americans found themselves fighting on opposing sides and where, although freedom was the ultimate goal, its achievement was fraught with hazards that continue to this day.'

'Thrillingly leads the charge for a new kind of "historical" drama'

'Ambitious and assured… the writing is poetic and richly textured, full of echoes and asides, moving deftly between registers… Parks is a writer of ambition, skill and soul, repurposing old forms in new ways and engaging with the ripples of history, telling a story that has yet to end'

'A rich, complicated, unsentimental play with an awful lot to say… fantastically imaginative'

'One of the top plays of the year... A richly textured mix of Brechtian allegory and Homeric epic, finding new meaning in an essential American tragedy'

'By turns philosophical and playful, lyrical and earthy, Father Comes Home from the Wars (Parts 1, 2 & 3) swoops, leaps, dives and soars, reimagining a turbulent turning point in American history through a cockeyed contemporary lens... The wonder of Ms. Parks’s achievement is how smoothly she blends the high and the low, the serious and the humorous, the melodramatic and the grittily realistic... the best new play I’ve seen all year'

'The best new play of the year... It is bold, hugely entertaining, moving and thrillingly ambitious. Suzan-Lori Parks bids fair to create a sprawling multi-part epic to plant alongside August Wilson’s monumental Century Cycle, one of the great achievements in theater history. Parts 4 through 9 (or more?) can’t come fast enough'

A darkly comic fable of brotherly love and family identity, winner of the 2002 Pulitzer Prize for Drama.
The Low Road

A fable of free market economics and cut-throat capitalism.
An Octoroon